Church of Our Lady Victorious – Infant Jesus of Prague

The Church of Our Lady Victorious is located in Prague’s Malá Strana district (on the same side of the river as Prague Castle). Originally, the church was a chapel dedicated to the Holy Trinity, and was built in 1584. The current church was built in 1611 – 1613 by German-speaking Lutherans. Circa 1620, the church was given to the Discalced Carmelites, an order which gave the building its current name and renovated it to its current appearance in 1636 – 1644. In addition, they added a monastery to the church. A tower was built in 1699, and visitors can see the date painted near the top of the building.

In 1628, the church welcomed its most famous inhabitant, the Infant Jesus of Prague (in Czech, Pražské Jezulátko). The doll was given by Polyxena, a princess of the House of Lobkowicz. Polyxena inherited the statue from her mother, María Maximiliana Manriquez de Lara y Mendoza of Spain, who received it as a present on the occasion of her marriage to a Czech nobleman, Vratislav II of Pernštejn. When the church received the Infant Jesus, he was placed in the oratory, and special devotions took place twice a day.

On November 15, 1631, Lutheran Swedish troops took over every church in Prague. The Church of Our Lady Victorious was looted, but the Infant Jesus remained, thrown on a trash pile behind the altar. It was discovered in 1637. According to legend, the Infant Jesus protected the city from an outbreak of the plague in the 17th century.

On January 3, 1644, a new chapel of the church, dedicated to the Infant Jesus, was blessed. In 1655, on the first Sunday after Easter, Archbishop Josef Corta crowned the doll, as well as giving it an orb. This event has been repeated every year since that time. In 1741, the Infant was moved to another chapel; by all estimates, it was around this time that the doll began to be clothed in various richly-decorated outfits. In 1794, the Carmelites were made to leave when the monastery was abolished. 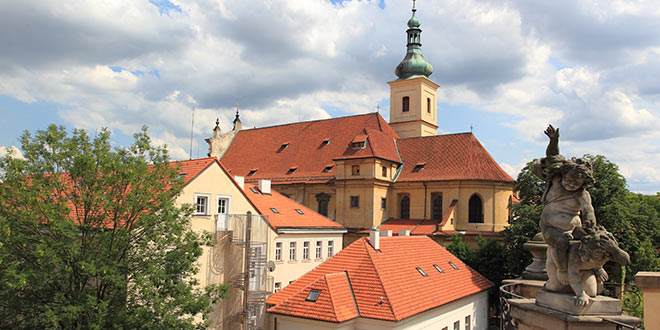 In 1948, Czechoslovakia became Communist. For slightly more than 40 years, religion of all sorts was all but forbidden, and the church was closed. On November 17, 1989, Communism fell, and with the coming of freedom, the religious buildings were restored to their previous owners.

Pilgrims from various countries (predominantly Spain, Italy, and Latin America) travel to Prague every year to pay homage to the Infant, and to pray for miracles. The Infant’s clothing changes periodically, according to season and celebration:

Green. This is the color most commonly worn by the Infant. It symbolizes hope and life.

White. White symbolizes holiness, purity, and glory. It is used for Easter, Christmas, and celebrations.

Purple. Purple is for penance. It is used for Lent and Advent.

Red. Red symbolizes fire and blood. It is used for Holy Week, Feasts of the Holy Cross, and Pentecost.

Gold. Gold is for feasts.

Pink. Pink is sometimes used on the third Sunday of Advent and the fourth Sunday of Lent.

Blue. This color is occasionally used for celebrations. 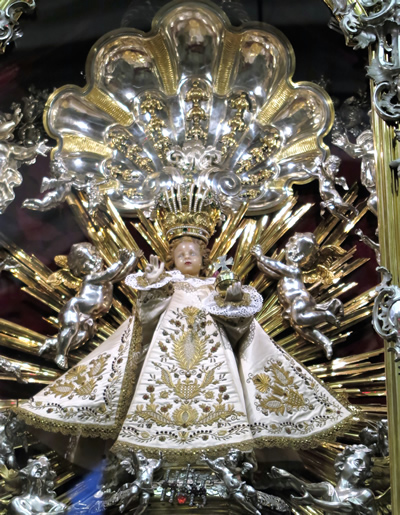 The Infant Jesus has a rather extensive wardrobe, containing approximately 100 outfits, though some are no longer usable. Empress Maria Theresa and Emperor Ferdinand I of Austria are among the notables who donated clothing for the doll.

The Church of Our Lady Victorious is free to enter, and masses are said in five languages (Czech, English, Spanish, Italian, and French). To the left of the main entrance is a souvenir shop. The famous Infant Jesus is in a glass case on the right side of the church. Farther along, also on the right side and just before the main altar, is a museum. This museum contains several interesting exhibits, including a crown donated by Pope Benedict XVI in 2009, Nativity scenes from around the world, and robes from such far-away places as Colombia and the Philippines. On the left side of the church is an altar dedicated to St. Teresa of Avila, believed by some to have been the creator of the Infant Jesus of Prague.

The opening hours are as follows.